I recently took part in a panel discussion at the Boston Society of Architects (BSA) on micro-units and accessibility.  Along with Bill Henning, executive director, Boston Center for Independent Living, Dianna Hu, software engineer at Google, and Michael Muehe, executive director/ADA coordinator, Cambridge Commission for Persons with Disabilities; I facilitated the night’s discussion on accessibility in this ‘tiny’ trend.

I began the discussion by looking at micro-units through a regulatory lens.  In Massachusetts, most privately funded multifamily housing projects are required to comply with 521 CMR, Massachusetts’ accessibility code, and the design and construction requirements of the Fair Housing Act (FHA).  I reviewed two sample micro-units modeled in the BSA One Room Mansion exhibit; the uhü and the 1-BDR micro-unit.  The uhü, short for urban housing unit, is a 385 SQFT prefabricated travelling unit developed by the Mayor’s Housing Innovation Lab and the BSA.  The One Room Mansion 1-BDR micro-unit is a diagrammatic simulation of a micro-unit that exists in the BSA Space. 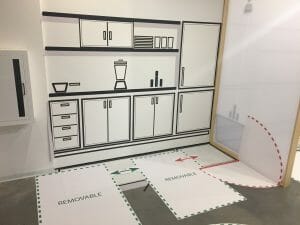 Overall, the units appeared to be meet the FHA and 521 CMR Group 1 requirements.  The units even appeared to meet many of the more stringent 521 CMR Group 2A requirements, with a few issues residing in the bathroom/ kitchen layouts. For example, the uhü bathroom lacked the required clearance at the toilet, which is a common issue.   To make this analysis more engaging, KMA printed full-scale diagrams to place in the 1-BDR micro-unit exhibit.  The full scale clear floor space diagrams were printed in green, for compliance, and red, for non-compliance.  Seeing the requirements in scale helped people to visualize the design changes that needed to be addressed.

This analysis led to a broader discussion regarding the need for accessible housing in Boston.  Dianna and Michael, both chair users, shared personal stories about the difficulties of finding accessible housing. Their stories brought some valuable perspective on the many challenges disabled people face when searching for a place to live.  The housing stock in Boston is expensive, old, and often lacks vertical access.  Both Dianna and Michael ended up renovating spaces because they could not find units that met their needs.  Bill Henning brought up some great points about how cities, which seem to put a lot of focus on affordable housing, need to bring attention to the lack of accessible housing as well.  He emphasized the difficulties people with disabilities and people with low income face when trying to find housing.

Personally, I was a surprised with how accessible the micro-units were.  Typically, when people think about accessible units they think large and open spaces, not micro-units. However, having gone through the regulatory requirements, it’s clear creating an accessible micro-unit is very possible.  With a little extra thought and some careful design, perhaps micro-units could help alleviate the need for affordable and accessible housing in the Boston area.