KMA recently finished a project installing a 3-stop vertical platform lift in a split-level ranch style home in Wellesley MA. The lift was necessary as one member of the family has MS. The “before” photo shows that homeowner had been using multiple stair chairs to get between the different levels of the house.

The project’s goal was to sensitively insert the lift into the existing house without interfering with the view of the woods or view from the formal sitting room.  We were able to locate the shaft for the lift in the middle of the house so that the lowest level is at the garage, the next level is on the first floor at the living room, and the last stop is on the second floor near the bedrooms.

KMA worked closely with D.M. Power Construction and Garaventa Lift to figure out how to use a non-standard door at the living room level that better matched the other doors in the house. This way, in the most formal room of the house, the lift door blends in with the existing style of the room.  The doors at the garage level and on the second floor are the standard Garaventa Lift doors. All the doors are on automatic openers.

On the second floor, the space for the lift came out of an extra bedroom. The space that was left was converted into an office and three large windows were added to take advantage of the view. 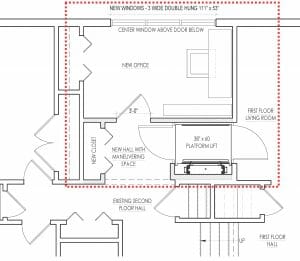 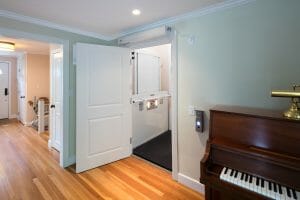 The upgrade from stair chairs to a platform lift is enormous, it gives the homeowner greater independence, saves time and allows her to freely move around all the rooms in her house, out the garage door, and into the neighborhood.

We often get asked which is better, a lift or an elevator. There are pros and cons to both. In Massachusetts, the maximum level change allowed for a lift is 12 vertical feet. This means that a lift can really only take a person between two floors of a house. Luckily, in this case, because the house is a split level, the lift can get to all three levels. Another issue with lifts that came up in this project is that when operating a lift, the button must be held down continuously the entire time the lift is in motion. If the rider releases the button, the lift will pause where it is, even if it is between landings. The best part about lifts is the price, they are significantly more affordable than elevators.